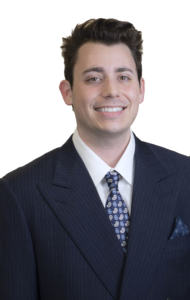 Upon graduation from college, Jett was admitted to the James E. Rogers College of Law
at the University of Arizona. Jett earned his Juris Doctor and is admitted to practice law before
the Arizona Supreme Court, United States District Court, District of Arizona, and the United
States Court of Appeals for the 9th Circuit. Jett joined Palmer Law Offices, P.C. as an
associate where his area of legal practice will be focused on personal injury, workers’
compensation, and wrongful death litigation.

Outside the practice of law, Jett is an active member in his community where he
volunteers with the Juvenile Diabetes Research Foundation. Jett also enjoys attending numerous
sporting events, especially baseball.

Have you been injured?

Start your case now.  Complete the below form, and a qualified personal injury attorney will contact you today!